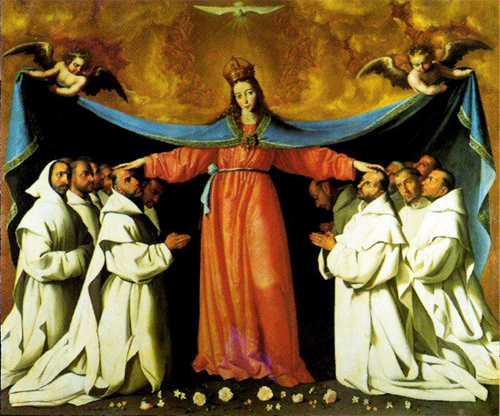 The blessed path of tribulations

The monk, who continues faithfully in his cell and lets himself be molded by it, will gradually find that his whole life tends to become one continual prayer. But he cannot attain to this repose except at the cost of stern battle; both by living austerely in fidelity to the law of the cross, and willingly accepting the tribulations by which God will try him as gold in the furnace. In this way, having been cleansed in the night of patience, and having been consoled and sustained by assiduous meditation of the Scriptures, and having been led by the Holy Spirit into the depths of his own soul, he is now ready, not only to serve God, but even to cleave to him in love. Carthusian Statutes, chapter 3

) states that for the soul to turn spontaneously to the contemplation of God "it is necessary that it should have labored long and suffered much in a life devoted to the service of God." He spent his last years back at Miraflores, not speaking Spanish, blind, finally alone with God. This will be ultimately the path of the SBPCLC's. The Suffering Servant

We celebrate the eternal newness of the mystery that is Mary‘s spiritual engendering of Christ in our hearts. Carthusian Statutes, chapter 21

If therefore we are truly living in union with God, our minds and hearts, far from becoming shut in on themselves, open up to embrace the whole universe and the mystery of Christ that saves it. Apart from all, to all we are united, so that it is in the name of all that we stand before the living God. This continual effort to be always — as far as human frailty permits — very close to God, unites us in a special way with the Blessed Virgin Mary, whom we are accustomed to call the Mother in particular of all Carthusians. Carthusian Statutes, chapter 34

“Christ is the supreme Teacher, the revealer and the one revealed. It is not just a question of learning what he taught but of “learning him”. In this regard could we have any better teacher than Mary? From the divine standpoint, the Spirit is the interior teacher who leads us to the full truth of Christ (cf. Jn 14:26; 15:26; 16:13). But among creatures no one knows Christ better than Mary; no one can introduce us to a profound knowledge of his mystery better than his Mother.” Rosarium Virginis Mariae by JPII, section 14

She is the safest, easiest, shortest and most perfect way of approaching Jesus and (they) will surrender themselves to her, body and soul, without reserve in order to belong entirely to Jesus.  Treatise on true devotion to the Blessed Virgin, Saint Louis de Montfort no 55

We make more progress in a brief period of submission to and dependence on Mary than in whole years of following our own will and relying upon ourselves. Saint Louis de Montfort in Treatise on true devotion to the Blessed Virgin

When you want to offer something to God, to be welcomed by him be sure to offer it through the worthy Mother of God. St. Bernard, quoted by  Saint Louis de Montfort in Treatise on true devotion to the Blessed Virgin

“To be devout to thee O Blessed virgin, is an arm of salvation that God gives to those whom He wishes to save” (St John Damascene, True Devotion, 41)

Venerating the Mother of Jesus in the Church, then, means to learn from her to be a community that prays, that is one of the essential characteristics of the first description of the Christian community outlined in the Acts of the Apostles (cf. 2:42). Prayer is often dictated by difficult situations, personal problems that lead us to turn to the Lord for light, comfort and help. Mary invites us to open the dimensions of our prayer, to turn to God not only in need and not just for ourselves but in a unanimous, persevering, faithful way with a " of one heart and mind" (cf. Acts 4.32 ). Pope: Praying with Mary, mother and Church Benedict XVI

Our Total Consecration to Mary

Saint Louis-Marie De Montfort's own blessed path of tribulations, gifted us of the Total Consecration to Mary

, in view of cleaving ever deeper to God. Our own personal Total Consecration to Mary could be a fruit of listening with the heart to the 11 guidelines, wishing to surrender ourselves more and more to a life of continual conversion through notably regular sacramental confession (Step 1), into living in a permanent "spirit of confession" (Adrienne Von Speyr Confession

), by our True Devotion to the Blessed Virgin, Mother of the Carthusians, and without which we who would wish to follow Saint Bruno, would be certainly lost, because "Our sanctity depends on the degree of our nearness to Mary. She is the nearest to God, and if we are the nearest to her then we therefore will be nearest, through her, to God Himself" Saint Maximilian Mary Kolbe.

Questions for reflection and further development